The Government set out its definition of British Values in the 2011 Prevent Strategy and these values have been reiterated by the Prime Minister this year. The DfE has recently reinforced the need 'to create and enforce a clear and rigorous expectation on all schools to promote the fundamental British values.' These are:

At St Edward's these values are reinforced regularly and in the following ways:

We provide a wide range of extra-curricular activities and strong pastoral support. We incorporate democratic principles, value the rule of law, support individual liberty and foster a community in which different faiths and beliefs are respected.

Democracy: We have a school council who are voted by peers and we invite speakers into school. We encourage debate and the idea of fairness and justice in our dealings with all within our community.

Rule of Law: We create our class rules, have a clear behaviour policy, organise visits from the police service, focus on the ten commandments and talk about the Rule of English Law; a legal system created uniquely in a Catholic England, inspired by Christian values.

Individual Liberty: We encourage students to be independent in their learning and provide students with opportunities for reflection as they take responsibility to discerning their vocation. Children have the opportunity to take on roles within school.

Mutual respect: We have a mission statement, promote good manners and respect for others, reinforce everyone's opinions in class debates, focus on Anti-Bullying whilst emphasising that everyone is unique but equal in the eyes of God and support charitable works.

Tolerance: We celebrate the range of other faiths and customs within our school as part of our 'International Week' where we bring together foods around the world, dance, music, song and poetry. We also use Jesus' example in the such stories as 'The Good Samaritan' and 'The Women at the Well'. 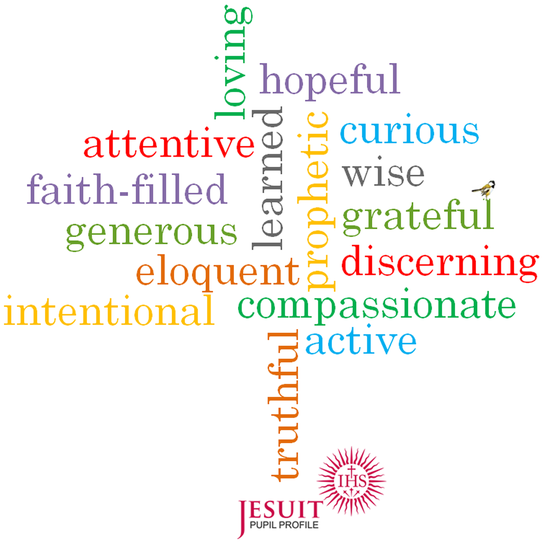 The Jesuit Pupil Profile has its own logo which shows the virtues we will be focussing on.  The tree is symbolic of the growth of the virtues. Within its branches comfortably resting is the goldfinch which has been used in art since medieval times to symbolise Christ and the Passion.

All schools in the diocese are adopting an approach similar to the Jesuit Pupil Profile. In the profile are eight sets of words which have been paired together because of their complementary and harmonising relationship to one another: from the development of one virtue springs another.